During the last two decades, the profusion of research on HIV due to the need to identify new therapeutic targets has given rise to a great deal of information on the retroviral replication cycle. However, although the later stages of the retrovirus life cycle, consisting of virus replication and exit, have been partially unravelled, the early steps remain largely enigmatic. These first steps are a long and dangerous journey from the cell surface to the nucleus, where the proviral DNA integrates into the host genome.

Retroviral particles must specifically bind to their target cells, cross the plasma membrane, reverse transcribe their RNA genome, while discovering the nuclei, find their way to the nuclear membrane, and penetrate the nucleus to finally dock and integrate into the genome. cell phone. Along this journey, the retroviruses hijack the cellular machinery and, at the same time, counteract the cellular defences. Elucidating these mechanisms and identifying which cellular factors are exploited by retroviruses and which hinder their life cycle will undoubtedly lead to the discovery of new ways to inhibit viral replication and improve retroviral vectors for gene transfer. Finally, as many examples in the past demonstrate, advances in retrovirology will no doubt provide some invaluable insights into cell biology as well.

The second and third steps are penetration and pickling, respectively. Retroviruses enter the host cell by direct fusion of the virion envelope with the host plasma membrane. Continuation of this fusion process results in the release of the viral capsid directly into the cytoplasm of the host cell, where it is partially disrupted. 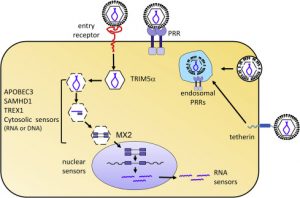 The fourth step is replication, which occurs after the retrovirus has undergone partial removal of the envelope. At this stage, reverse transcriptase converts the RNA genome to double-stranded DNA. Reverse transcriptase has three enzymatic activities: RNA-directed DNA polymerase causes a retrovirus to adhere to the membrane of a host cell, penetrate and uncover its genomic RNA. Single-stranded RNA (ssRNA) is used as a template for the creation of double-stranded DNA (dsDNA), which is then integrated into the host genome.

Once transcribed back into RNA, it encodes viral proteins, assembles into viral particles, and is released from the cell. The DNA strand, DNA-directed DNA polymerase produces the complementary strand, and RNase H degrades the viral RNA strand. Reverse transcription is performed by a cellular transfer RNA (tRNA) that is packaged into retrovirus virions. It concludes with the synthesis of a double-stranded copy of the retroviral genome called “provirus” or proviral DNA.

This proviral DNA is circularized and transported to the host cell nucleus, where it integrates, seemingly randomly, into the genome by the retroviral enzyme integrase. After integration, the provirus behaves like a cellular gene pool, while the LTRs function as promoters that start transcription back into mRNA. This transcription is carried out by RNA polymerases in the host cell. Proviral DNA transcription is also the means of generating RNA progeny. Viral proteins are manufactured in the cytoplasm of the host cell by cellular ribosomes.

The next step (step five) is called ‘assembly’, in which the retrovirus capsids are assembled in the immature form at various sites in the host cell. This is followed by an “egress” stage, in which the envelope proteins of retroviruses are acquired by budding from the plasma membrane (cell surface) of the host. Finally, step six is “ripening.” In this step, the Gag and Pol proteins of the retrovirus are cleaved by a retroviral protease, thus forming the mature and infectious form of the virus.